Our past shows include two farces, two murder mysteries, a comedy that’s not a farce (apparently there is a difference) and a radio show about Shackleton’s expedition in the Antarctic. All shows are Canadian with five by  Calgary authors. 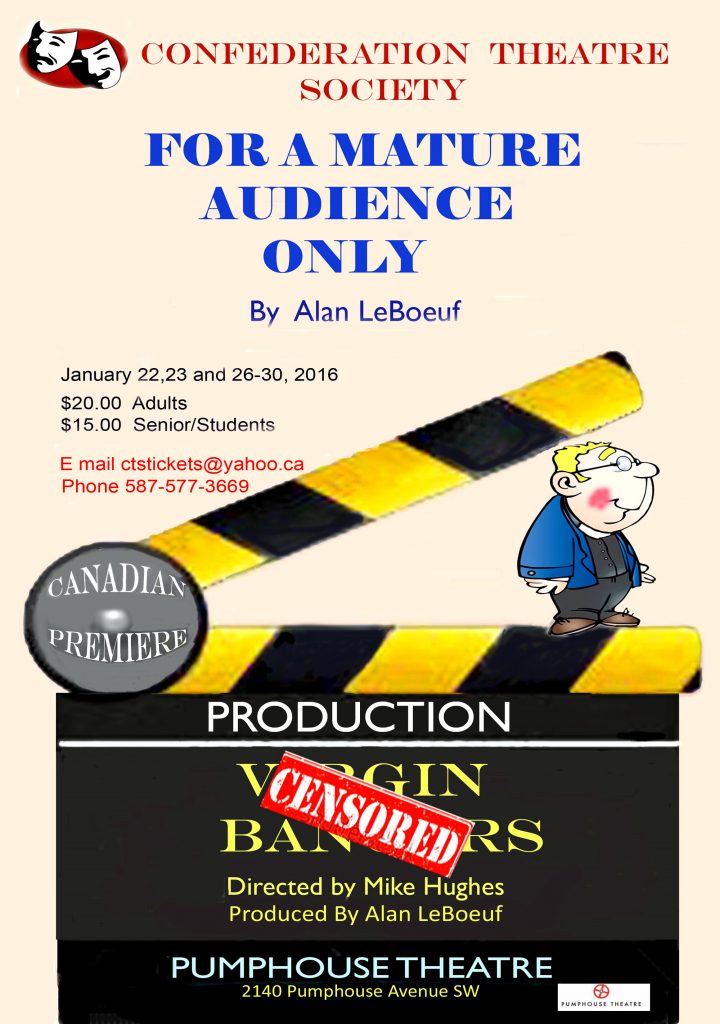 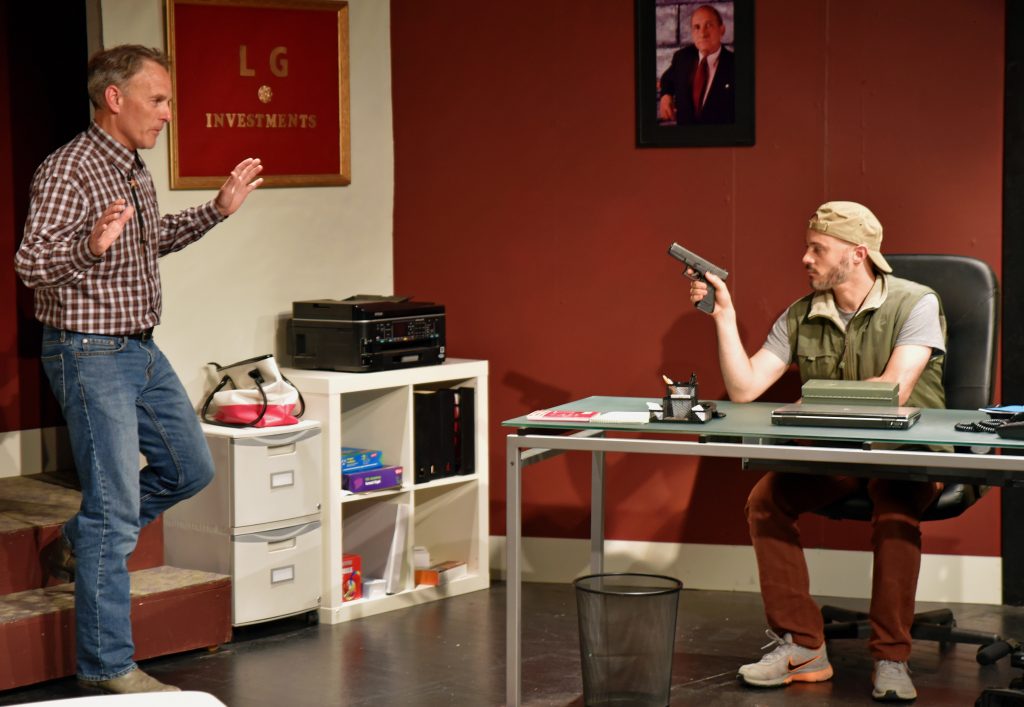 Larry Hoffman is stopped in his tracks by Jamie Cunnington

Investment in Murder was set at the isolated desert mansion of a high flying fund manager. The fund hasn’t been doing well of late (or so it seems) and the investment manager dies in the middle of a broadcast to his investors. Did he really die? If he did – then where did the body go. Plot twists and a cast of seemingly benign innocent characters make solving this one difficult. 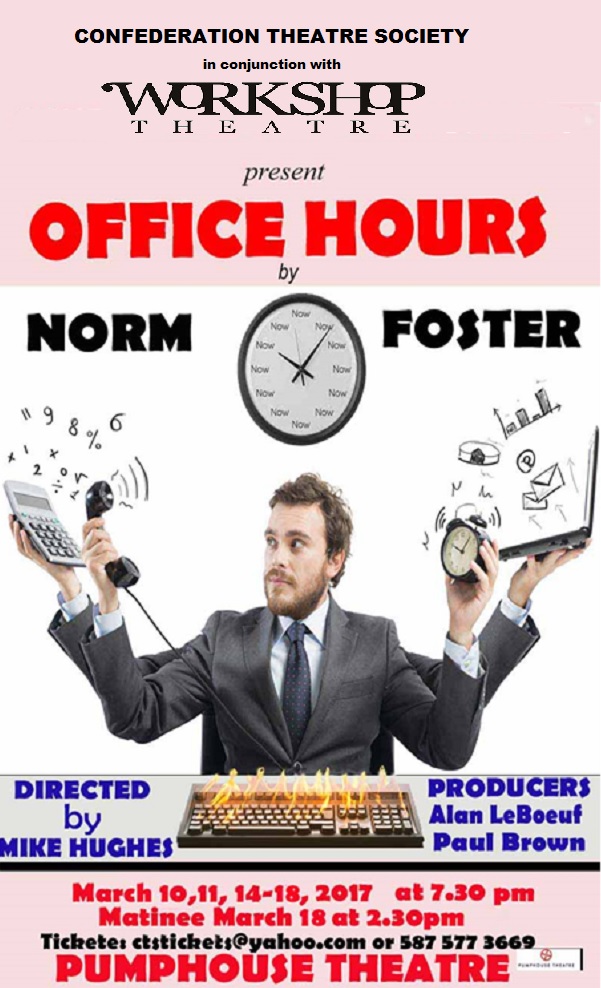 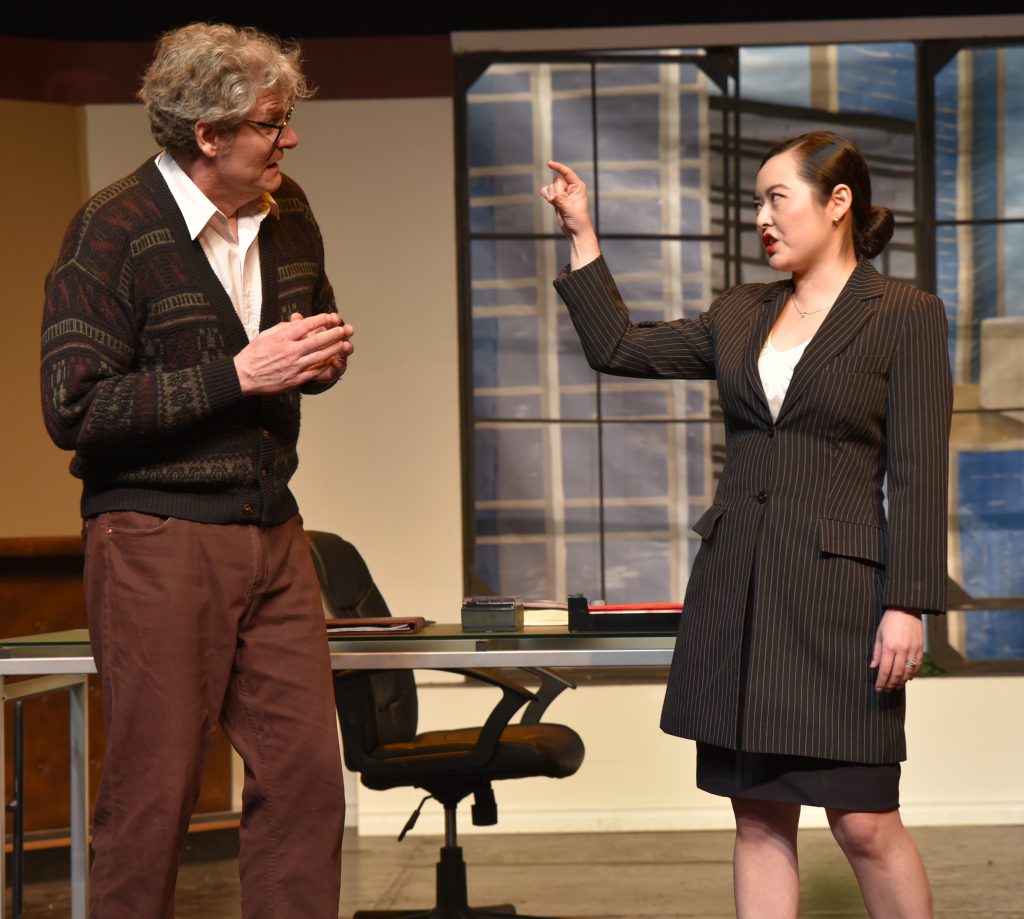 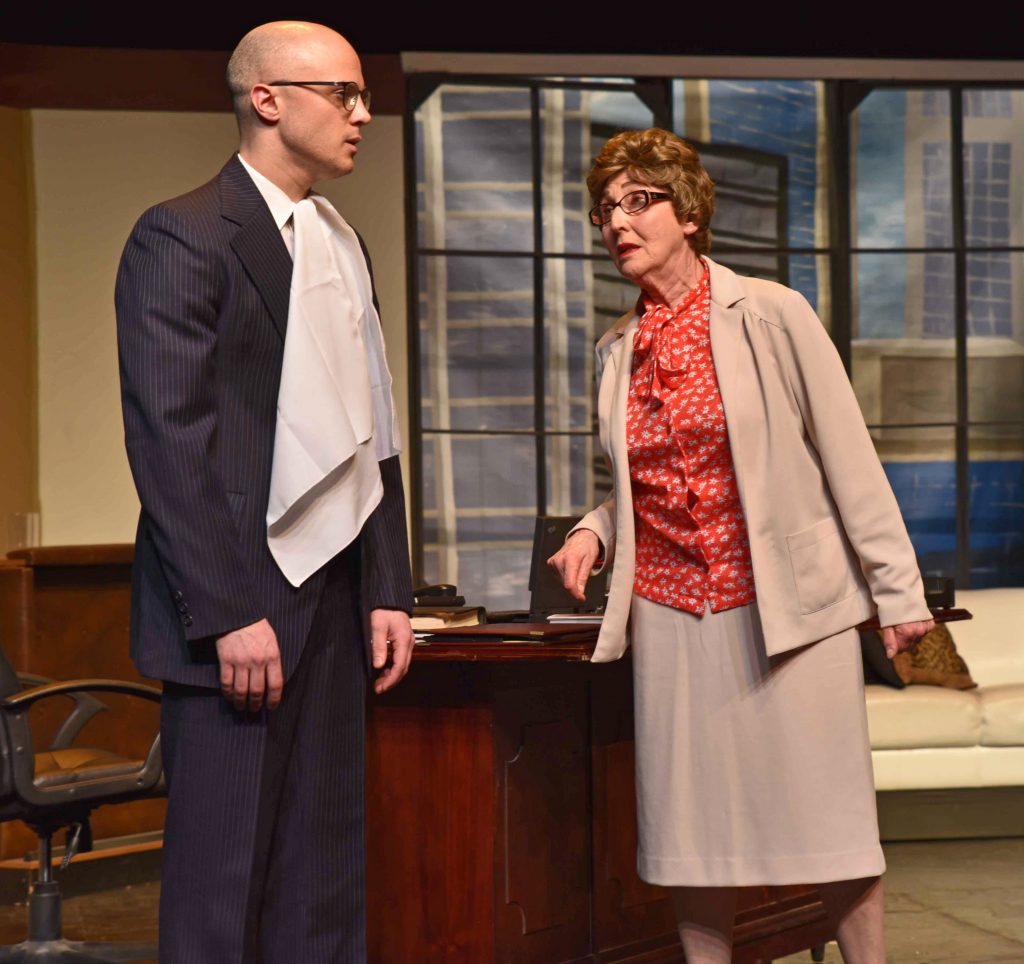 Office Hours, a comedy by Norm Foster – a well known Canadian Playwright – happens over the course of an afternoon in 6 different settings, but with a common thread to all. 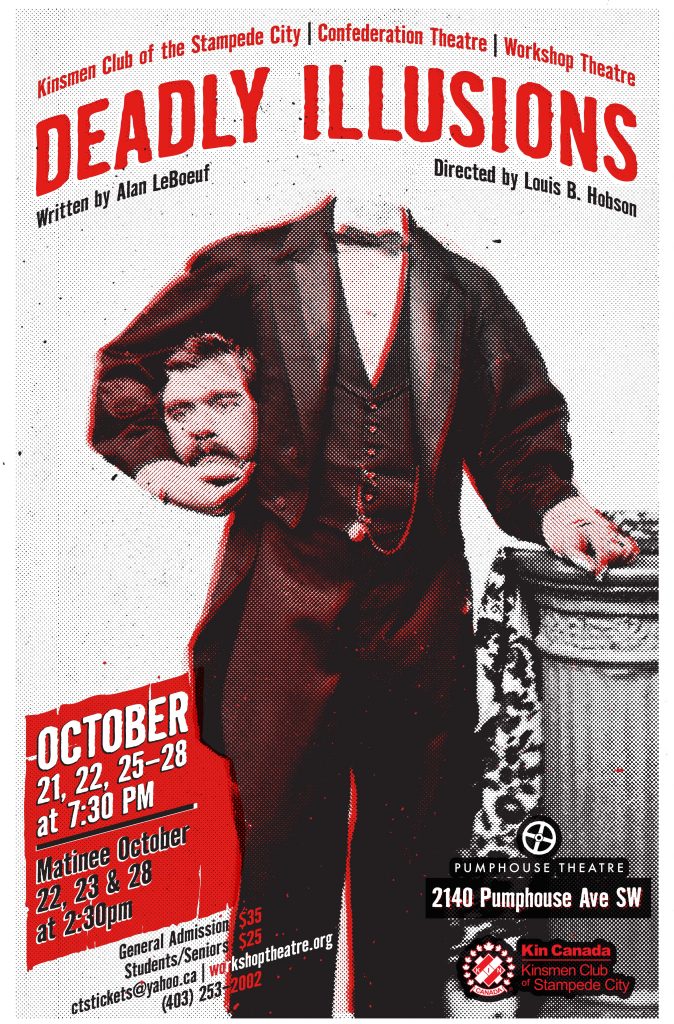 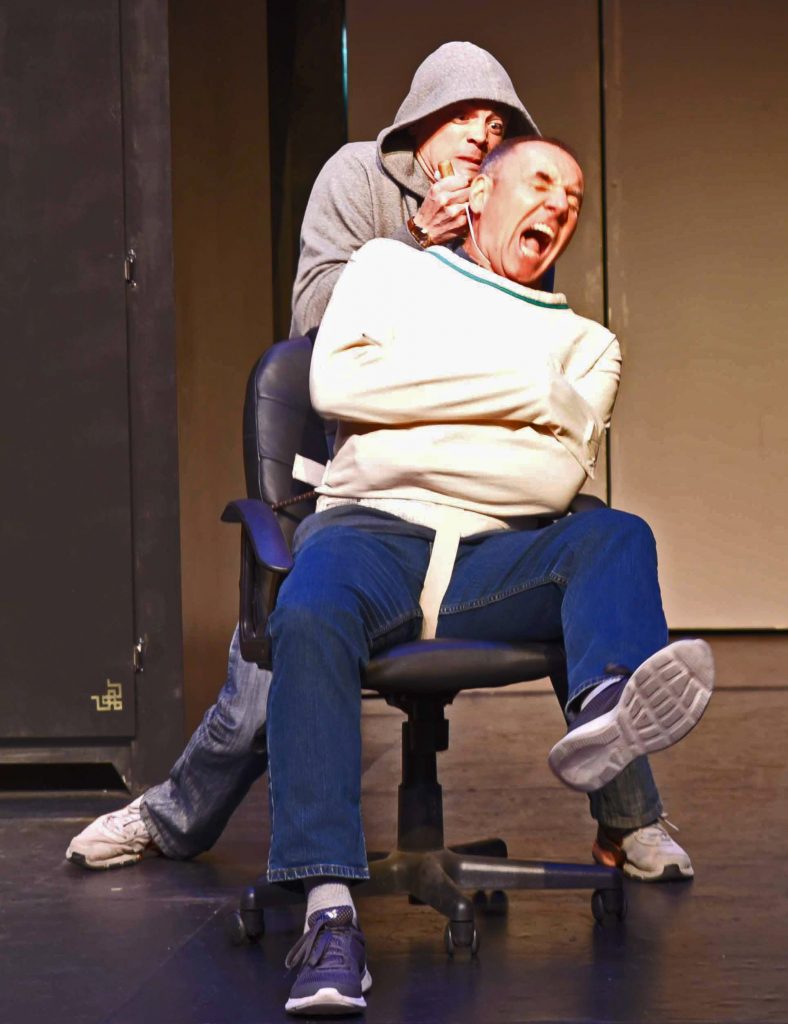 Jamie Cunnington does away with Fred Krysko

Anne Hodgson and Michael Armstrong as the investigating detectives.

Deadly Illusions  is a murder mystery that takes place in the midst of the classic disappearing cabinet trick. The cabinets really worked, and no, there are no trapdoors in the Pumphouse.  Members of Calgary’s Magician community were on hand to entertain theatre goers in the lobby prior to the show.  Watch for many of these magicians again in our Magic Show April 14-15 at the Pumphouse. 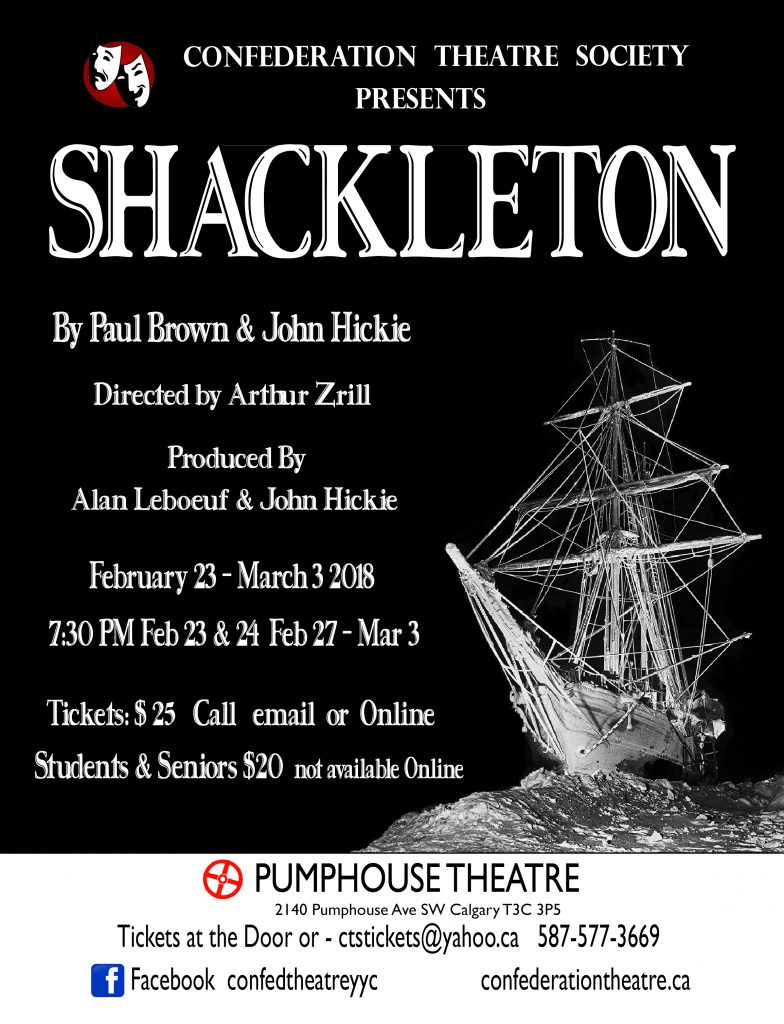 Our most recent show, Shackleton, was about Ernest Shackleton and his crew being marooned in the Antarctic for two years.  It’s an amazing story – better yet, it’s all true.  With an engaging script and live on-stage sound effects this was a must see!

Some comments from our audience members about Shackleton:

We’ve been to the Antarctic five times.  The sound of the crumbling cracking ice was just like being back on board our icebreaker – how did you know?  The penguin calls were spot on. Everything was great; the story and the sound transported us back to a place we love.  A.C. Calgary.

As I had not heard of Ernest Shackleton, I found the play educational and amazingly inspiring. The Foley artists were highly impressive. – A.W. Lethbridge.

We enjoyed Shackleton, the radio play, very very much. The actors were fully engrossed in their roles. We could feel the hardship that they must have had to go through, just by listening. The Foley sounds were very convincing. – C.B. & J.B. Calgary

An original idea, executed wonderfully and told in immense detail. It is amazing to see the Foley and the story come together on stage. – S.M.K. Calgary

Better than a regular play or movie.  I just closed my eyes and let my own mind set the scenes for me.  The Foley sounds combined with the actors voices made for a very rich experience. A.G. Calgary

It sounded fantastic. The play was excellent. My only regret is that I didn’t listen with my eyes closed at times.  K.F. Calgary

The story was compelling by itself.  With the sound effects added, it was beyond compelling. L.H. Calgary 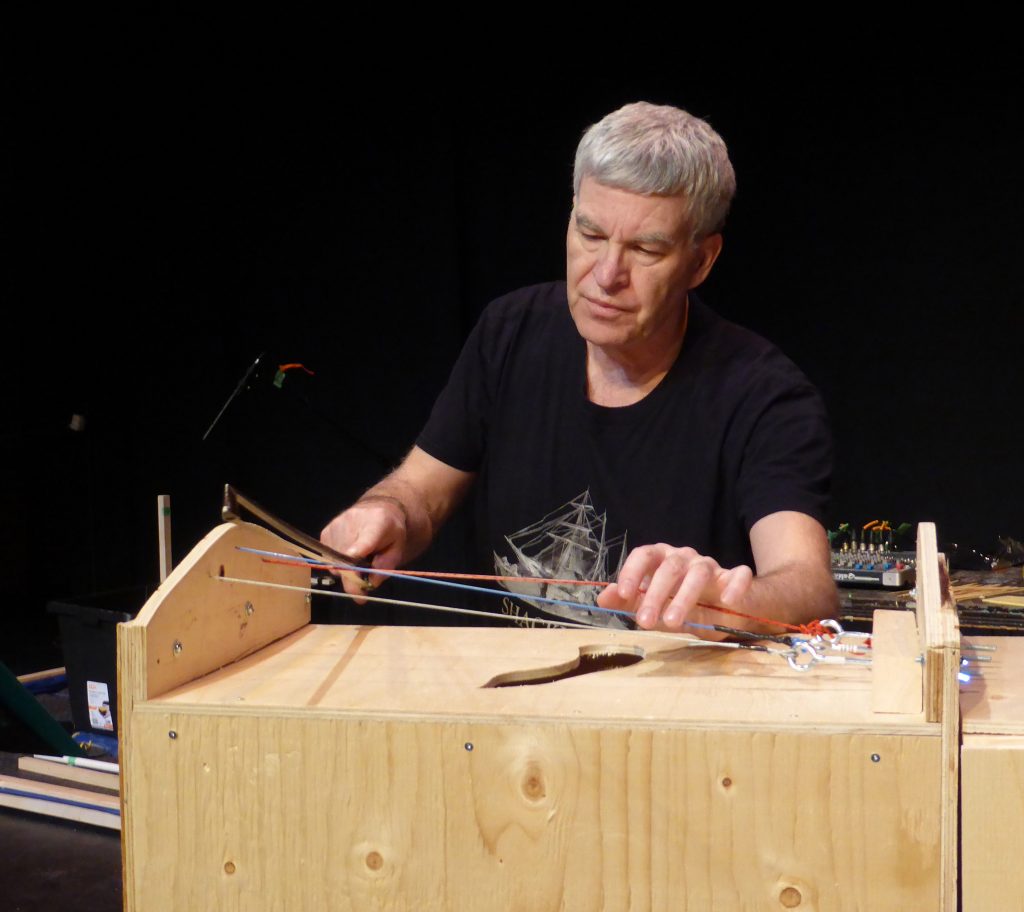 John Hickie with the Foley creak box used to simulate the creaks and groans of an old sailing ship and the sounds of ice under tension.  Never used anywhere else before, this Foley rig was developed by John specifically for this show. 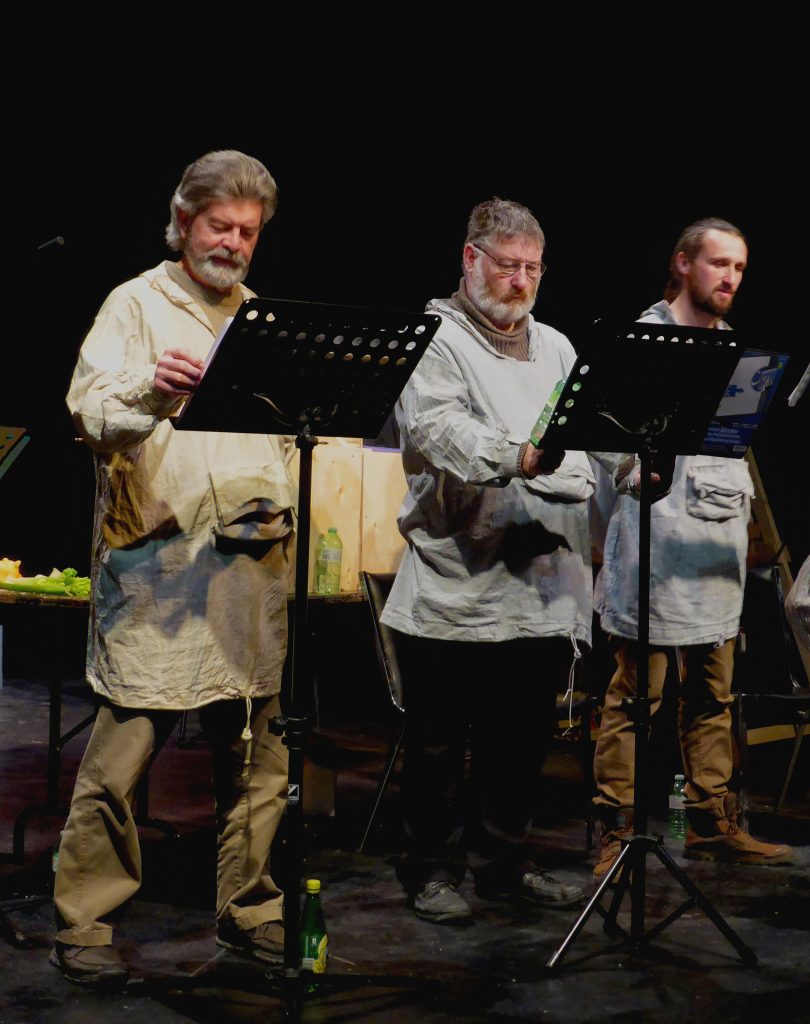 Smashing cabbages for a sound effect during the play. 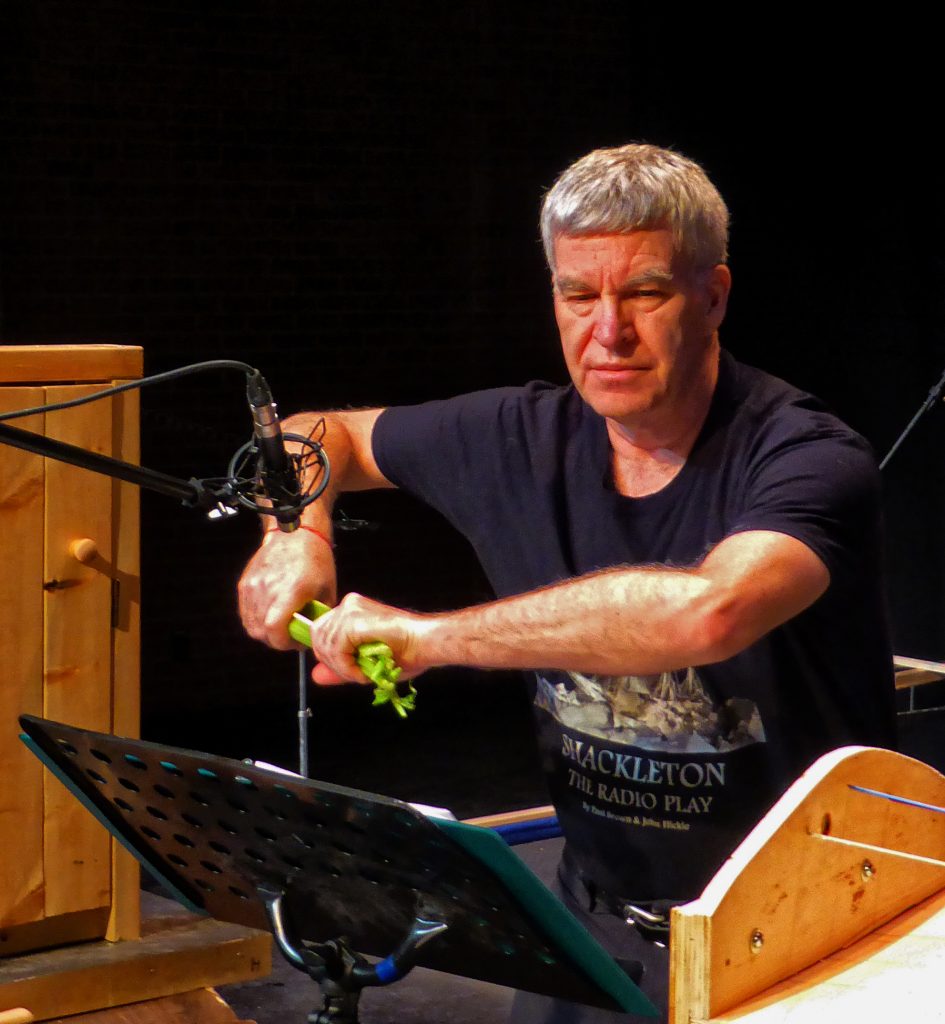 Two stalks of celery combined with a paint stirring sticks was used to simulate the sound of ice cracking.  The sound of the celery and sticks together was totally different than celery by itself or the stick by itself.

Peter Warne and Kevin Chinook as Leonard Hussey and Frank Hurley narrated the story during the first act.  Fredy Rivas is in the background simulating the grinding sound of the ice floes.  We used a hydrophone submerged in our water tank to make the ice and water sound effects richer. 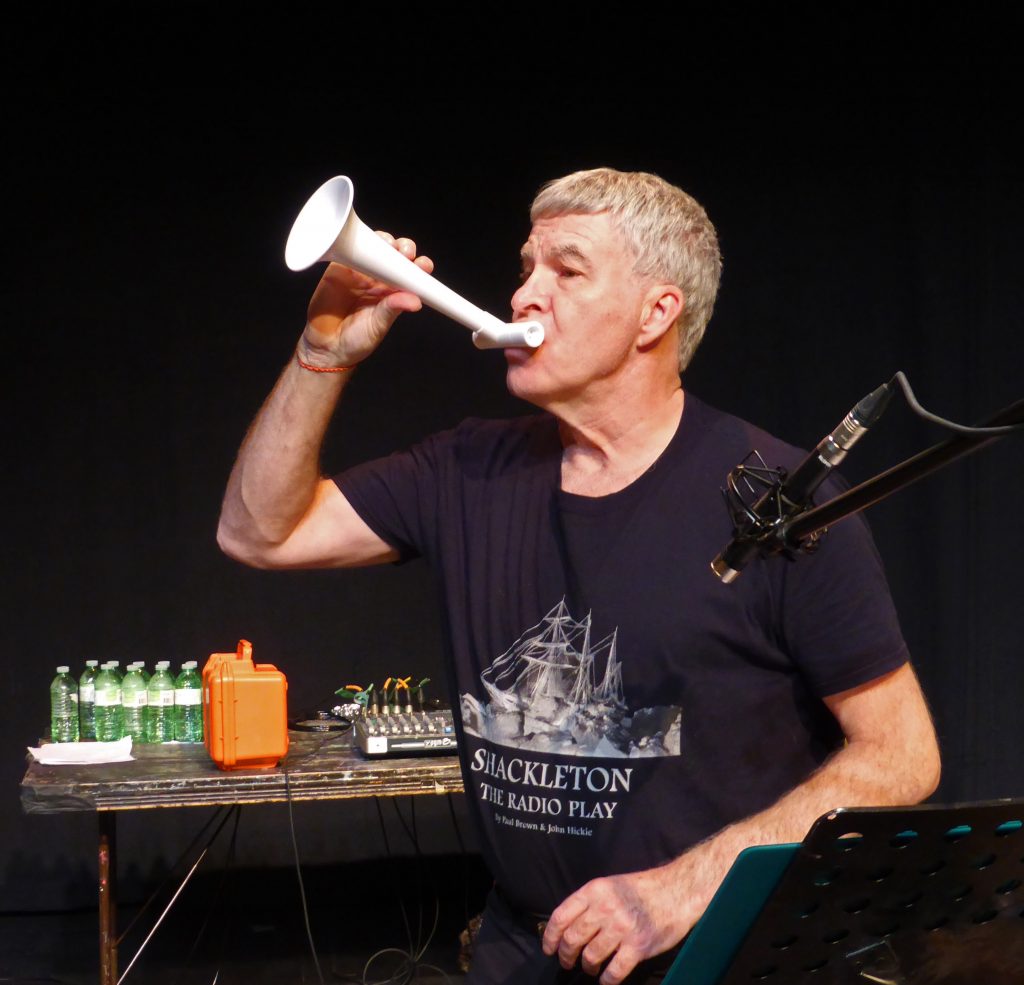 John Hickie simulating the sound of an Adelie penguin.  Fredy Rivas and John practiced while listening to recordings of real penguins.

The cast and Foley artists onstage.

John Hickie with our Foley door.  The Foley door and the wind machine are standard theatrical sound devices used all over the world.